Home / Issues / To gross attack on freedom of expression in Nepal, popular satirical song deleted from YouTube within two days of release

To gross attack on freedom of expression in Nepal, popular satirical song deleted from YouTube within two days of release 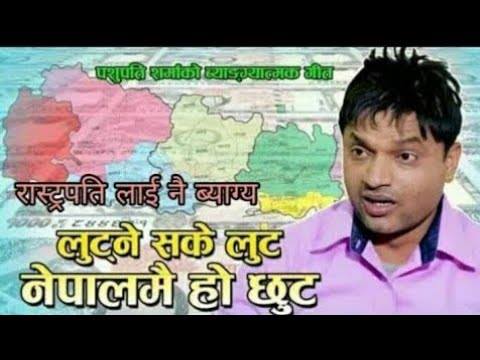 To the latest episode of government's series of attacks on freedom of expression and press freedom in Nepal, a satirical video song, demanding good governance with an end to corruption, has been deleted from YouTube within second day of its release on 16 February.

Within second day of the release of satirical video song ''Lutnasake lut kanchha (Loot, loot, brother, loot as much as you can!) by popular singer Pashupati Sharma, the youth wing of the ruling Nepal Communist Party (NCP) – Youth Federation Nepal- issued a circular to its all cadres to protest against the song by Sharma in all districts across the country.

After the Youth Federation's circular, Pashupati Sharma wrote in the Facebook post that he was lifting the video song for some time because some friends expressed concern over some words in the song. He thanked the large number of viewers as well and was against irregularities and malpractices afflicting the country.

The Federation's circular has clearly panicked the singer and spread alarm over the aware populace.

What's in the song?

(Loot, loot, brother, loot as much as you can; you're not allowed for it in other countries, but free to loot here in Nepal!)

The video song begun this way is an obvious reminder of some notorious cases of corruption and bribe seeking unfolding in Nepal in the recent time. Whether it is the financial irregularities by the government or the public institutions, the video has decried these and ironically encouraged a 'kanchha' (brother!) to loot and plunder as much as he can as he's free and allowed for it in Nepal!'

The song clearly signals the horrifying and reeking corruption and bribe-seeking in Nepal. The luxury of public officials at the hardship of the common people is exposed by the song, winning the heart of people.