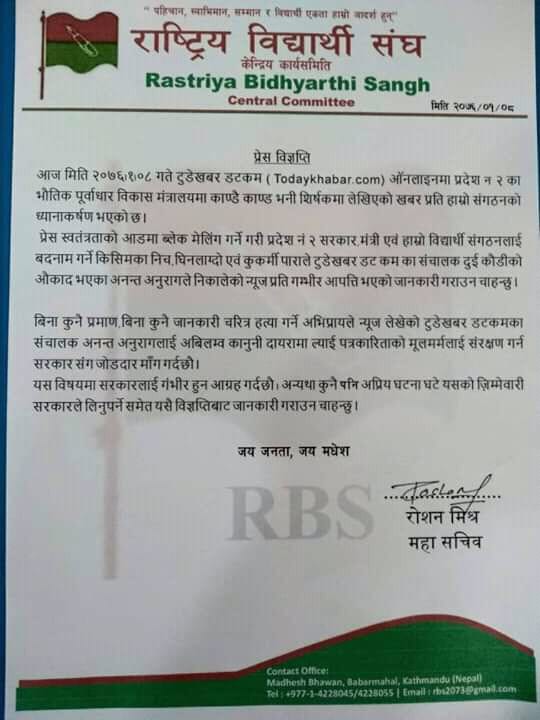 Freedom Forum has serious concern over threat issued to a senior journalist for publishing news about the Province 2 Minister on April 21 in Kathmandu. Kathmandu, the capital city of Nepal lies in Province 3.

As per the information received from Province 2 representative for Freedom Forum Rajan Singh, editor at www.todaykhabar.com (an online news portal) Ananta Prasad Mehta (Anurag) was issued threat through a press statement.

The statement published following the publication of news on the online portal reads- The news has defamed Province 2 government, minister and student association hence, we demand immediate action against the journalist otherwise, the government itself, has to be responsible for any mishaps occurred in future.

Furthermore, talking to FF's media monitoring desk senior journalist Anurag shared that one can resort lawful way for any reservation on news contents but publishing abusive and threatening statement and using his photographs without consent on social media is condemnable.

"It has not only threatened me and my team but also tarnished my image", he grieved.

Threatening journalist for publishing news is the sheer violation of press freedom and the right to information. To this, FF observes- despite the presence of legal ways, threatening journalists with abusive statement is strictly condemnable. Hence, FF urges the concerned authority to address the issue seriously and ensure safe atmosphere for the working journalists.