Threat of attack on singer Thapa 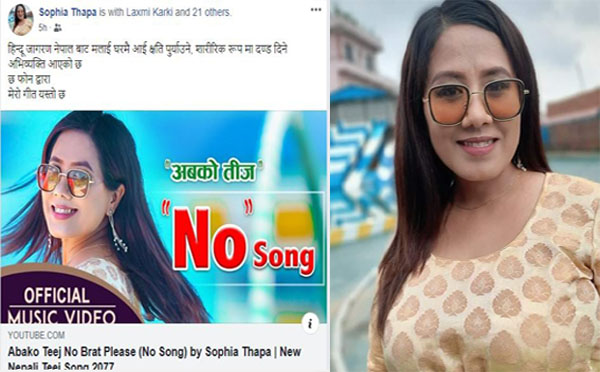 Various religious organizations and individuals have issued threats and resorted to online harassments against singer Sophia Thapa for her song. In the song, she has said no fasting in the Teej festival, a cultural festival celebrated by Hindu women.

Her new song "Aba ko Teej no brata please" (no fasting this Teej) was premiered from Highlights Nepal youtube channel on 19 July. "Since the release of video song, comments from a section of people using abusive words and threats have been flooded on youtube and social media," Thapa said. "Some have even threatened me of picketing my home for assault."

A comment from youtube user Abhiman Jung Shah Shankar has warned of slaughtering the singer for singing against Hindu religion. Teej festival is mostly celebrated by Hindu women in Nepal. Most of them stay on whole-day fasting wishing for the healthy life of their husband or beloved one.

"My intention is not to hurt the sentiment of any religion or belief. I am also a Hindi and follow Hindu rituals. I have just appealed to women not to risk their health by fasting and it doesn't help for the good health of their husband either," Thapa said. "But some people blamed me for being Christian and labeled with various accusations just while using my freedom of expression via the song," she said.

A Facebook page in the name of World Hindu Youth Committee has demanded removal of the song and warned of starting protest if not removed.

Freedom Forum condemns the online harassment and threat of attack on singer Thapa because it violates her right to freedom of expression. She has not belittled any belief in the song. There are no words of hate speech, but just the message for women not to risk their health in the name of fasting. The song has further advocated for equality among male and female. Freedom Forum also urged the administration to stay alert to prevent the possibility of untoward incident against singer Thapa.