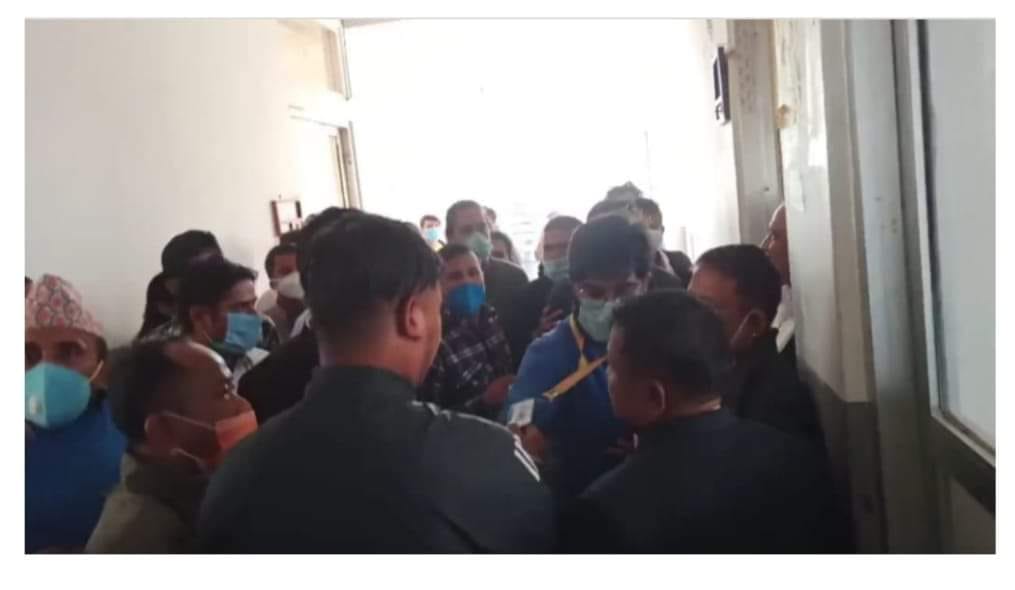 (Photo: Khagendra Ghimire's Facebook Page)
Jhapa-based reporter to Mountain Television Khagendra Ghimire and his camera person Bhaskar Shrestha were attacked by the government officials while reporting in a Land Revenue Office in Jhapa on December 1. Jhapa district lies in Province 1 of Nepal.

Talking to Freedom Forum's monitoring desk, Ghimire shared, "We were recording a video of a staff (Indra Rajbanshi) receiving bribe amount Rs 10,000 from a client. Meanwhile, the staff snatched the camera."

"Following this, we went to the office of the Chief Tara Dhungel to discuss the matter but Rajbanshi along with others thrashed us on our shoulders and face," added Ghimire.

Reporter Ghimire sustained injuries on his head, chest and has been undergoing treatment at the local hospital. Cameraperson Shrestha however, escaped injury from the incident.

A team of journalists are talking to the police chief demanding the arrest of the accused, informed Ghimire to FF.

Freedom Forum vehemently condemns the incident as it is a gross violation of press freedom. Reporting on the irregularities and the issues of public concern is the duty of a journalist. Also, the citizens pay tax to receive service from the public bodies thus, they deserve fair service delivery.  In this case, while asking for bribe is a crime, attacking journalists for doing their job adds to it. Hence, FF strongly urges the concerned authority to arrest and punish the attackers and ensure a fair reporting atmosphere for the journalists.

-Update-
Main accused Indra Rajbanshi has been arrested on December 4 after an arrest order issued by the District Administration office and is kept under detention for further investigation at Jhapa Police Office.