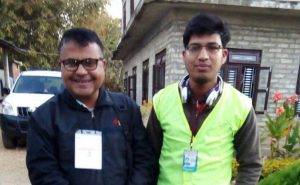 Freedom Forum has serious concern over an army officer's obstruction and misbehavior towards journalist duo Lalan Mandal and Nikesh Khanal at Bardibas, Mahottari on January 5. Reporters were misbehaved by Nepal Army's Major Pushkar Basnet while reporting on illegal sand and gravel excavation from river within the army barrack and its transportation to Churiyamai Washing Center.

Reporter Mandal is affiliated to Khabar Darpan daily and Suryodaya Television while Khanal is Mahottari based reporter to Ratopati online news portal and Radio Sungava. Mahottari district lies in Province 2 of Nepal.

According to the information received by FF, the reporters visited the army barrack area to follow up on the sand excavation carried out at Yuddhakabja gulma (an army barrack).
Informing that the activities were carried out as per agreement between Nepal Army and Churiyamai Washing Center 's owner Bijay Sah, threatened reporters asking  "Where are you from and why did you enter our premises without permission?".

Major Basnet further added that all the activities were carried out according to the order of Major General and they had right to do anything within their premises. Furthermore, Major Basnet also threatened them not to publish any kind of news about excavation and seized their mobile phones and camera and deleted the pictures they had taken.

FF condemns the incident as this is a sheer violation of press freedom. The incident is a serious threat to the journalist's press rights.  Excavation of the natural resources is an issue of public concern and journalists has every right to investigate on the public concern issues and illegal activities. Hence, FF strongly urges the concerned authority to investigate upon the case and ensure free reporting atmosphere to journalists.